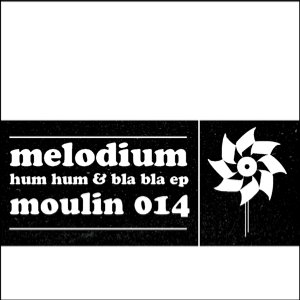 Following his last and critically acclaimed album La Tete Qui Flotte, Melodium comes back with a brand new mp3 ep (under Creative Commons Licence) made of 5 new tracks & 3 remixes of tracks featured on La Tete Qui Flotte. The paternity of the tracks is unquestionable, as the melodies of this artist (now based in Angers - France) are easily identifiable and always reach emotionnal climaxes (tenderness, sweetness, sadness, grace...).

3 talented artists were asked to work on the remixes :
- Ochre (Toytronic Records - UK) makes Hellomusic dance a waltz and then takes the track along a beautifull digital galaxy where emotion is not left appart.
- Interlude Pour Depressifs, the corner stone of La Tête Qui Flotte, develops new shades of colors under the sensitive & mechanical brush of Audioroom (Arbouse Recordings - Fr).
- Marsen Jules (Autoplate, City-Centre-Offices - Ger) dilutes the layers of La Fin De Tout, helping the violins to arise, rocking us with a kind of old symphony.

The EP is also slightly experimental with the use of irregular sounding clicks and pops and lots of other weird but overall mellow sounds. In the midst of all the varied sound sources lies very nice musical arrangements that wonât disappoint.

Favourite tracks:
Hellomusic (Ochre remix)
Sounding almost classical in nature, a strange contrast is brought about in the listening experience by the clicky and poppy percussion that goes on for most of the track. The track transforms itself beautifully as it progresses in an almost strange manner for most electronic music which involves just adding more harmonies and playing louder. Leveraging on the concept of dynamics that most electronic musicians forget about. The only complaint I have about the track is that the percussion doesnât sit that nicely in the mix during the later parts.

Untitled 5
This track sounds like it started its life as a pop piano piece. Sprinkle in glitchy sounding percussion, strings and uplifting arpeggiated synths and you have a kind of playful pop piece that sounds like it belongs in a vintage videogame.

La fin de tout (Marsen Jules remix)
A perfect ender track for the EP. Guitar chords and melodies are superimposed with the sounds of atmospheric pads and a synth that wails on in the background echoing memories of farewells that are both beautiful and sad at the same time.

Uploaded by autres directions in music on August 30, 2005